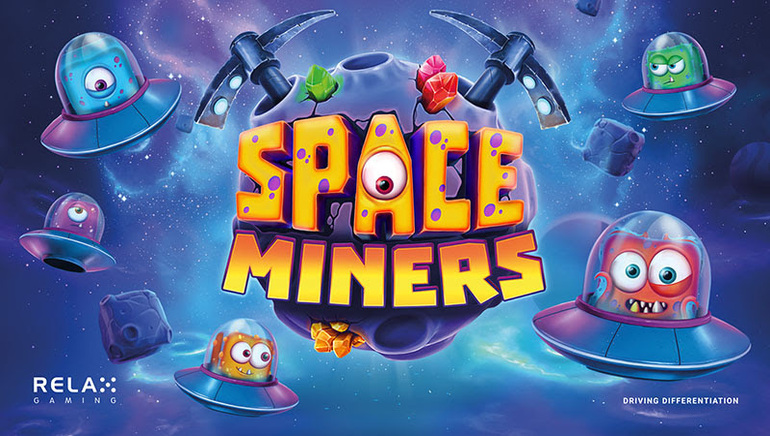 Mine the universe for riches for a chance to win up to 50,000 times the bet each time you spin the reels of Space Miners by Relax Gaming.

Relax Gaming has big expectations for 2022 and wants to start the year on a positive note. The wheels are already set in motion because one of the most anticipated games of the year is scheduled for release in February. Space Miners is a fun-looking slot offering the promise of big winnings, a high return to players, and iconic features. You can spin its reels on mobile devices or computers and enjoy the same thrills.

Embark on an Intergalactic Adventure

Space Miners has a name that sheds quite a bit of light on its theme and players know precisely what to expect. If you like slots with a sci-fi theme, then this new release by Relax Gaming will check all the important boxes. The game can be tried in demo format before making a deposit and gambling for real, to get familiar with the gameplay. For free or real money, it is guaranteed to appeal to players who like an adventure that pushes the boundaries of space.

The theme is relatively simple, but developers did a fine job at immersing players into the Space Miners universe. Martians are the central characters of the narrative, as they are on a mining frenzy across the universe. While their objectives are uncertain, players will witness their unrelenting nature, as they seek planetary riches. Instead of fighting them or competing for resources, players will join their ranks and provide much-needed assistance in collecting power-ups to unveil hidden treasures.

Play a Game of High Volatility

Space Miners is not a game for the fainthearted, although the theme is pretty funny and laid-back. That’s because its players will discover a game that is defined by high volatility. This is one of the most volatile games developed by Relax Gaming, so you need a decent bankroll to weather any storm. On the bright side, the game with a 6x10 matrix has a high return to the player of 96.47%. If you activate the feature buy, the percentage increases to 97.14%, which is well above the industry average.

Another thing that helps this slot stand out from the crowd is the payouts mechanic, which has up to 1 million ways to win. Casual punters and amateurs who can’t afford to bet larger amounts will find solace in tiny wagers of €.10. The maximum bet is €20 and the maximum amount that can be won is 50,000 times the bet. Space Miners will be available in Denmark, Estonia, Great Britain, Isle of Man, Latvia, Malta, Romania, and Sweden starting on February 8.