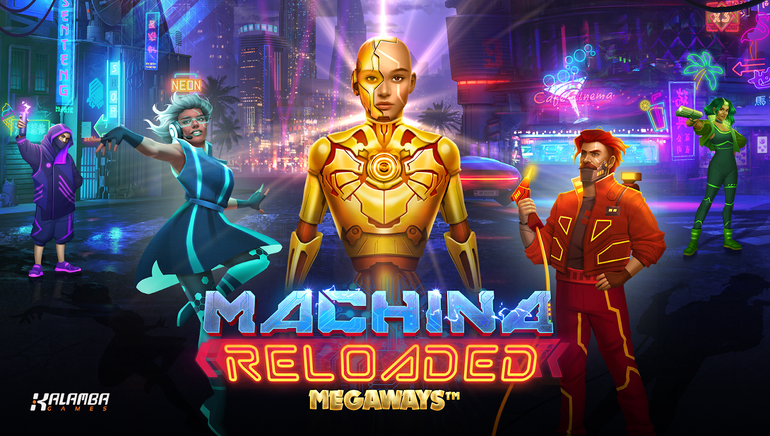 Machina Reloaded Megaways™ is the latest release to the exceptional portfolio of Kalamba Games, a sequel to a celebrated future theme slot.

Kalamba Games is at the forefront of innovation, with modern slots that quickly immerse players in the gaming atmosphere. If you enjoy titles with a futuristic theme, you will surely appreciate the return of a classic. Machina Reloaded Megaways™ is a sequel to the game with the same name, and it promises to exceed expectations and pleasantly surprise veteran fans. Those who spin the reels of the new release for the first time will enjoy the high RTP and the unique features.

Rumble Ratz Megaways™ was the first game from this prestigious software developer to incorporate the iconic mechanic created by Big Time Gaming. It paves the way to epic winnings, and those who spin its reels can expect a memorable gaming experience. The game has six reels, and the symbols populating them accurately represent cyborgs and androids. Creating winning combinations is easier thanks to the Machina Reloaded Megaways™ wild symbol, which substitutes the other signs.

The scatter symbol is the exception to the rule, as it can’t be replaced by the wild, yet it has extraordinary power. Three of them are needed to produce free spins, and if you unlock more of them, you can receive up to 18 bonus rounds. Unlocking additional scatter symbols during the free spins will increase the ladder next to the game to maximize winnings. There are also a total of four Cashpot levels, which are activated whenever 10 or more cyborg symbols pop up.

The Buy Bonus HyperBonus feature allows players to jump straight into the heat of the action and unlock the bonus round immediately. The amount to pay depends on the stakes chosen so far, and there are two distinct levels of HyperBet. Depending on what you choose, the number of max Megaways™ can differ; the same goes for the cost of the spins. Meanwhile, the ladder will turn regular symbols into higher-paying ones to deliver progressively better payouts.

Alex Cohen, COO, and Co-Founder of Kalamba Games broke the news about the new release and celebrated the addition of the Megaways™ mechanic. It has arrived just in time to make the sequel to a classic game truly memorable and significantly increase the fun opportunities. With the maximum win at 37,000 times the bet, the sky is the limit in the Machina Reloaded Megaways™ slot.