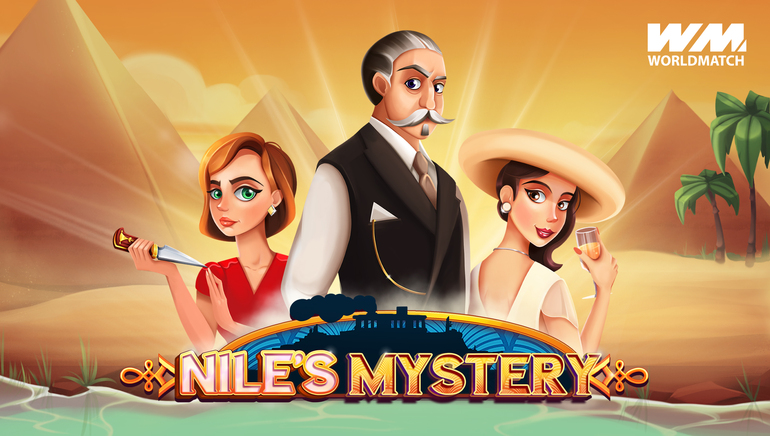 The majestic Nile River has captured the attention of dreamers, treasure hunters, and ancient Egypt enthusiasts over the years. Now, WorldMatch has launched its most daring adventure yet, Nile’s Mystery slot machine game.

Amid strife, somebody has kicked the bucket. There is a sailboat filled with enough champagne to drown the Nile River, and somebody on board this vessel is guilty of murder. Everyone is a suspect. It's your job to uncover the mystery in the eponymous Nile's Mystery slot machine game.

Trust is a rare commodity on board this riverboat. Somebody has a deep, dark secret, and anyone could be a coldhearted murderer. They're all after cash – boatloads of it – and because they are filthy rich, they just can't be trusted. Behold the detective wild symbol. The sleuthing detective is on the case. The symbol can substitute for all other symbols to reward players.

When players land 3+ wild symbols stacked above one another on the same reel, the interactive Free Spins round kicks into high gear, it pays winnings of 2X your bet size. When you land these wild symbols in combination, you can get 6, 4, or 2 Free Spins rewards. Once the Free Spins are activated, the triggering wild symbol remains on the reels until the Free Spins Round of play concludes.

Players will be awarded an additional Free Spin for each Free Spins symbol that appears on the spinning reels. When players land 3X bonus game symbols, the bonus game kicks into gear. There is a single bonus game for each spin. During this unique feature, players are tasked with selecting one sarcophagus of many to reveal a reward.

The killer is lurking, but luckily the reels don't lie. Players are tasked with uncovering the Nile's Mystery in this exciting new release from WorldMatch. This video slot machine game features a 5 x 3 reel format with 243 paylines in play. It's a medium volatility slot game with an RTP of 96%.

The in-game symbols include an array of killer objects such as a shotgun, a knife, and a glass of champagne laced with arsenic. Other symbols in the game include a luxury boat and a diamond-encrusted necklace. The high-paying symbols include the four characters in the game. They have higher multipliers associated with them, based on your bet size. In addition, players can enjoy mystery symbols, a free spins bonus, a bonus game, and extra spins.